What does it mean varicose veins endovenous ablation? 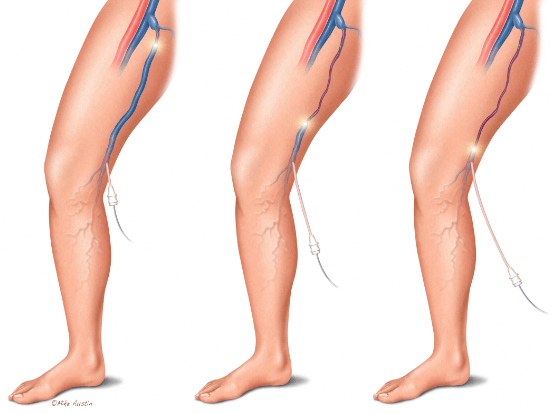 Individual plan of treatment consists of:

Preparation of varicose veins to ablation 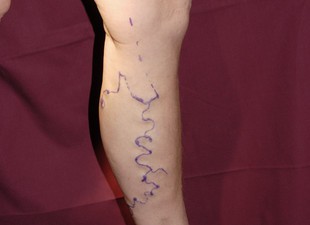 A surgeon will discuss with a patient, beafore planning the procedure, all the nuances of the procedure, probable complications, all the advantages and disadvantages of treatment and probable alternatives.
A patient should inform a surgeon about all the medicine he or she takes in, about disease he or she has and about allergies ( local anesthetic allergy or allergy n medicine that is used during scleropherapy).
A surgeon, before a procedure, may advise you to stop using blood thinners drugs, nonsteroidal anti-inflammatory drugs (aspirin, ibuprofen etc) or can offer alternative drugs. Come to a procedure in comfortable clothes, all the jewellery should be erased as well. Special supportive tights should be worn after the procedure. They may be bought in pharmasy or a patient may buy them in our clinic.
Supportive tights should be worn for 24 hours after a procedure (or longer according to doctor’s order ), and then tights should be worn for 5-10 days.

Moderate pain and irritation may appear during the several days after the treatment, a surgeon will reccomend you suitable analgetic. Veins treatment is done by local anesthesia and general anesthesia is not needed.

Ultrasound veins testing has been done before the treatment. It has been done in order to identify the size of treated area. A leg is washed and shaved if it is needed, it is also aseptisized. If laser energy is used during the procedure, the special glasses will be given to a patient.
Laser or radiowave probe is injected under local anesthesia. Laser or radiowave catheter, under ultrasound control, is injected into injured veins through small holes. Injured area treatment has been done under local anesthesia.
Laser ray or radiowave catheter sends energy pulse that closes veins. A detector moves through a vein and closes it step by step. Veins, that are situated nearby, are remained intacted.
Later laser ray or radiowave catheter is erased, bleeding is stopped by pressure. The cut is tapd by plaster. Supportive tights are put on the legs. 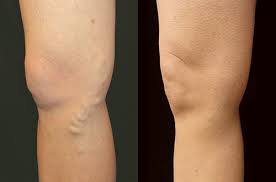 Discomfort, measurable pain, swelling and bruises may appear after the treatment.Taking into consideration swelling and bruises can appear and the fact that you should wear supportive tights we reccomend you to plan your treatment during cold season. Partial loss of sensetivity may appear in treated area for some days. In some cases the recovery may last up to 6 months. Inflammation may, rarely, appear after 7 -21 days and it may last up to 10 days.
If a patient feels intention in a shin-bone, swelling or redness of a treated area please contact the clinic. Mostly all of treated veins disappear after the procedure; some of them may be noticed during 6 months. Skin colour may be yellow in treated area, the colour will disappear in some weeks.

The treatment takes 45-60 minutes. If a surgeon reccomends you to compound the treatment with other varicose veins prosedures (for example,withminiflebectomy, sclerotherapy) it takes 1,5-2 hours. If two legs need to be treated, we reccomend to take two procedures within one month (one leg may be treated for oneprocedure ). Supportive tights or stockings should be worn for 30-45 minutes every day.

Are there any complications of endovenous ablation?

Endovenous ablation is quite safe and does not have any complications. There are not any scars left after the treatment. One patient out of 1000 may have wound infection. Antibiotics treatment is needed in case of inflammation. Some patients seldom have swelling and bruises, supportive tights will help in this case. Complications based on nerve injury are quite uncommon.
One patient out of twenty may have an inflammatory reaction of treated veins that may be treated easily by using nonsteroidal anti-inflammatory drugs (ibuprofen, for example, and etc.). Cooling compress is quite effective as well.
Deep vein thrombosis is a dangerous complication. In order to prevent it, we maintain a control after the treatment.
Varicose veins are a chronic issue, even after the treatment it can appear in other areas. According to some investigations the ablation method proves its effectiveness. It is effective in 85-97% even in 10 years after the treatment.

When should patients feel the result of the treatment?

The result of endovenous ablation appears immediately in 95-100% cases and it remains the same in 85-97% cases in ten years. Due to the results of investigations, radio-wave ablation treatment proves its effectiveness in 99.6% cases for a term of two years
Not so many investigations are held that could show us how patients spend their daily life after the treatment, but life becomes better. Endovenous ablation is regarded as a “gold standard” in many developed countries.

The majority of modern, widespread technologies and different methods of varicose treatment are acceptable in our clinic. World leaders in medicine sphere teach our doctors. They use different treatment methods that provide minimally invasive treatment of varicose veins.

NB! Our clinic holds a contract with the Estonian Health Insurance Fund to provide medical services. For patients who have a referral, the first consultation with a medical specialist costs 5 euros. All repeat consultations are free.

Cookies are commonly used on our websites to facilitate better user experience. Cookies enable our web servers to recognize you and automatically adapt the content to fit your needs when you access the site. Using cookies also makes it easier for us to learn about our users' needs. They provide us with usage statistics which enable us to measure and improve our website's performance.

Users of our websites are deemed to consent to the usage of cookies if their web browser is set to accept cookies. If you do not accept cookies, the operation of a number of our website's services and functions may be restricted, for example in being able to retain your personal settings.

These provisions may be changed from time to time without notice in order for us to be compliant with the legislation and/or generally accepted practice relating to cookies.